Activists in Maine protested Saturday outside the Northeast Harbor home of Leonard Leo, the co-chairman of the Federalist Society who has played a leading role in building the conservative Supreme Court majority that recently overturned federal abortion rights.

Leo famously developed a list of right-wing jurists that included all three of President Donald Trump’s eventual nominees to the bench. Each of those justices — Brett Kavanaugh, Neil Gorsuch and Amy Coney Barrett — joined in a June court ruling described by advocates as “dangerous and chilling” that overturned Roe v. Wade.

The New Yorker has called Leo “in effect, Trump’s subcontractor” on high court nominations. And a writer with the National Review stated in 2016 that, “No one has been more dedicated to the enterprise of building a Supreme Court that will overturn Roe v. Wade than the Federalist Society’s Leonard Leo.”

Leo bought a nearly 8,000 square foot mansion in Northeast Harbor — on Mount Desert Island — during the fall of 2018. In 2019, activists protested outside the house when Sen. Susan Collins attended a private campaign fundraiser there.

Collins, a Maine Republican, famously cast a pivotal vote in favor of confirming Kavanaugh, one of the conservatives Leo helped elevate to the court, and also voted for Gorsuch. Activists warned that both were hostile to abortion rights, but Collins — who says she is pro-choice — still voted for them, arguing they would respect precedent set by Roe. Wade. Both Kavanaugh and Gorsuch, however, ultimately voted to overturn abortion rights.

Saturday’s protest was the continuation of a number of rallies outside Leo’s mansion, including one in June at which participants celebrated the elevation to the Supreme Court of President Biden nominee Ketanji Brown Jackson and gathered to let Leo know “we are for justice, equity and love, not hate.”

Dixie Hathaway, one of the people at the demonstration over the weekend, said the goal of the rally was to “raise awareness that this person is the one who’s primarily responsible for our Supreme Court and for all the horrible” rulings the court has made. She noted that such awareness is important given that many people don’t know who Leo is.

“We would like to make him feel uncomfortable,” Hathaway said, adding that some participants have contacted local nonprofits that receive money from Leo to let them know about his background and to make the argument that his donations are “intended to buy acceptance in the community.”

Hathaway said the court’s June abortion decision is just one harmful ruling the majority Leo helped seat has recently made. During the last term, right-wingers on the bench also severely limited the power of the Environmental Protection Agency to combat climate change and struck down a New York gun control law.

Hathaway and another demonstrator, Tina Stein, both told Beacon that Leo seemed upset by the protest on Saturday and that the police were called about the demonstration, and Hathaway shared a photo with Beacon of an officer on the scene. However, she said activists stood their ground.

Overall, participants have had a number of productive conversations with people passing by during the demonstrations, Hathaway added. She said many of those people know about Leo and are sympathetic to the protests.

An attempt to reach Leo for comment about the rally was unsuccessful.

Top photo: Activists at the protest by Leo’s house on Saturday | Tina Stein 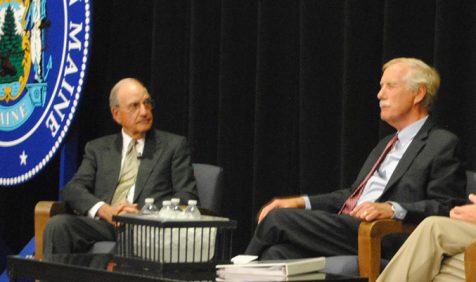 Question 1 on the November 3rd ballot earned the support of two Maine political giants on Thursday, with the joint… 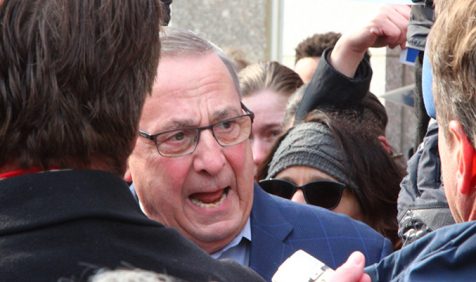 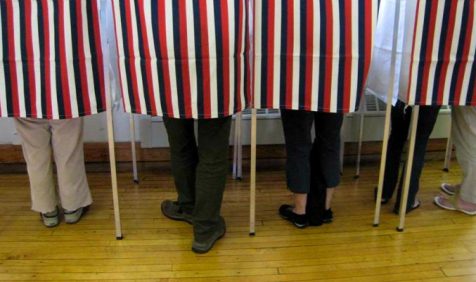