Democrats in the U.S. House of Representatives on Tuesday muscled through a $3.5 trillion budget framework, overcoming a standoff with a handful of centrists who had demanded the House first approve the bipartisan $1.2 trillion infrastructure bill passed by the Senate.

That position by 10 House Democrats — including Reps. Josh Gottheimer of New Jersey, Carolyn Bourdeaux of Georgia, Jared Golden of Maine, and Stephanie Murphy of Florida — prompted a late-night negotiating session Monday between the centrists and top House Democrats.

The move risked upending the president’s domestic policy agenda, due to the razor-thin majority that Democrats have in the chamber.

Ultimately, all 10 voted to approve the budget framework in Tuesday’s party-line 220-212 vote, in which every House Republican voted in opposition.

The procedural vote included a commitment that the House will vote on the Senate-approved infrastructure bill by Sept. 27 — just days ahead of the Oct. 1 deadline that House Speaker Nancy Pelosi (D-Calif.) had set for approving both the infrastructure bill and the budget package.

Pelosi said during her floor remarks Tuesday that she “salutes” the bipartisan nature of the infrastructure deal, but said that measure alone is “not inclusive of all of the values we need to build back at a time when we have a climate crisis.”

Tuesday’s budget vote kicks off a fast-paced process that must be completed by Sept. 15 to draft the budget measure, which is expected to create and expand a broad range of domestic policy programs on child care, climate change, community college, immigration and health care.

“Today’s action by the House begins the hard work of enacting what I believe will be among the most consequential legislation Congress has considered since the Great Society,” said Rep. Chellie Pingree in a statement after the vote.

“This watershed bill will provide aid to working families, resources to fight the climate crisis, and tools for job creation and health care access that will remake millions of lives for the better,” Pingree said. “The American people elected President Biden and this Congress to lift the nation up and give working families a fair shot. We are close to that goal and I will work hard to get this legislation to the President’s desk to fulfill our promises.”

Republicans opposed the budget resolution, blasting it as recklessly increasing government spending at a time when inflation is increasing costs for American families.

“Democrats know their proposals are unpopular. They can’t even get their own conference to agree,” said Rep. Michelle Fischbach (R-Minn.), referring to the objections from the handful of centrist Democrats.

In a statement after the vote, Golden touted the approach that cleared the House as one that guarantees an infrastructure vote next month that is separate from the domestic budget reconciliation package.

“This successfully removes the bipartisan infrastructure package from being held hostage to other legislation and establishes a firm path for Congress to send this once-in-a-generation infrastructure bill to the president,” Golden said in a statement provided to Bangor Daily News.

But, since voicing his initial opposition to the plan, Golden has been under increasing pressure from voters to support the reconciliation package.

On Monday, activists with Maine People’s Alliance (of which Beacon is a project) dropped off dozens of hand-written notes from his constituents calling on him to support the Democrats’ budget, particularly investments in climate and care infrastructure, as well as a pathway to citizenship for immigrant essential workers.

“There are things in this budget that should have been passed 40 or even 50 years ago,” said Auburn resident Rev. Stephen Carnahan, speaking specifically about the provisions to transition our economy to renewable energy and other proposals to address the impacts of the climate crisis. “We all know that we don’t have much more time. Let’s get it done.”

The current spending proposal calls for investments in“clean energy, efficiency, electrification, and climate justice through grants, consumer rebates, and federal procurement of clean power and sustainable materials, and by incentivizing private sector development and investment, according to an outline of the House process released by Budget Committee Chairman John Yarmouth, (D-Ky.).

As for what advocates are describing as “human infrastructure,” the proposal is also expected to include funding for home-based care services, establishing a federal paid family medical leave system, expanding Medicaid in all 50 states, allowing Medicare to negotiate drug prices, and making the fully refundable child tax credit permanent.

Biden and Democratic leaders are pushing to pay for the proposal by raising taxes on corporations and the wealthy by, among other measures, raising the corporate tax rate and cutting loopholes in capital gains taxes.

The vote transpired the same day that national advocacy organizations Americans for Tax Fairness and Health Care for America Now, along with Maine People’s Alliance, released a report highlighting the amount that billionaire wealth has grown during the pandemic, which the group said underscores the need for tax reform measures to fund the spending bill.

According to the analysis of Forbes wealth data, the nation’s 713 billionaires have seen their collective wealth grow by $1.76 trillion, or nearly 60%, since the start of the pandemic in March 2020. That leap, the report notes, amounts to one-half the estimated $3.5 trillion reconciliation package.

“We can raise some $4 trillion for vital public services simply by ensuring the rich and corporations begin paying their fair share of taxes,” said Frank Clemente, executive director of ATF. “In the budget soon to be voted on, Congress needs to reward work, not wealth, ignore the pleadings of special interests and do what voters are demanding.”

Top photo: U.S. Rep. Jared Golden held a press event with workers from the Laborers’ International Union of North America in Kittery on August 19 to tout the benefits of the bipartisan infrastructure bill. | via Twitter 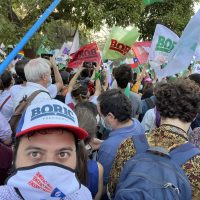 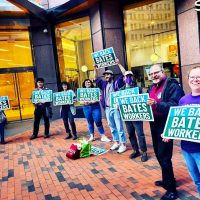 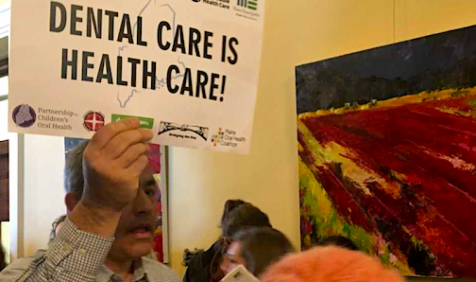 A bill that would extend comprehensive dental coverage to over 200,000 adults in Maine took a major step forward this… 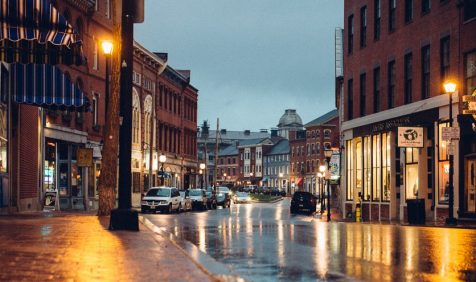 Sen. Angus King voted with Democrats on Tuesday to begin a process to pass a sweeping $1.9 trillion pandemic relief…