The Inflation Reduction Act is the biggest environmental investment in U.S. history. And while celebrating that step forward, some advocates in Maine say the bill falls short of what is ultimately needed to avert the worst impacts of climate change and have raised concerns about fossil fuel-friendly provisions placed in the measure at the request of West Virginia Sen. Joe Manchin.

After a year of oft-tumultuous negotiations over the Democrats’ domestic agenda, President Joe Biden signed the Inflation Reduction Act (IRA) into law earlier this month. Along with investments to combat climate change, the measure contains reforms to the U.S. health care and prescription drug pricing systems as well as a strengthening of corporate taxes.

The bill, however, is vastly slimmed down from the Build Back Better measure Biden originally pushed for, which would have made historic investments in climate, health care, child care, and more. That measure was sunk amid opposition by Republicans along with resistance from Manchin.

Still, many advocates have celebrated the climate provisions of the IRA. The measure will, over the course of the next few years, direct $370 billion to clean energy programs, such as electric vehicle tax credit initiatives, tax incentives for renewable energy production and installation, and money for low-income people to electrify their homes.

Additional parts of the bill include funding to help the transportation sector transition away from fossil fuels, money to help communities (often low-income or of color) that have been disproportionately impacted by pollution, allocations to make agriculture more environmentally friendly, and funds for coastal resiliency and to address drought in the western U.S.

Models have estimated that by 2030, the bill is likely to cut emissions by about 40% below levels from 2005. That projection factors in the nearly 30% reduction already expected by 2030 under existing policy. The 40% emissions reduction would get the country closer to — although not yet at — the goal set by the Biden administration of a 50% decrease in emissions by the end of the decade.

That is a significant step forward, advocates in Maine said.

“This legislation is a really big deal for the climate,” said Kathleen Meil of Maine Conservation Voters.

“Maine has been making tremendous strides in the last few years with the climate action plan and community resilience partnerships and all sorts of leading policies to accelerate renewable energy and really support community resilience,” she added. “And we’ve always known we cannot do it alone. This is the partnership and support we need from the federal government.”

Meil said she’s particularly excited about the IRA’s investments in energy affordability, which has emerged as an issue of concern in Maine. She said funds within the bill that cover, in some cases, almost all of the cost of transitioning to a high efficiency heat pump will be good for the climate and beneficial for Mainers’ pocketbooks.

Still, as Meil and other advocates acknowledge, the bill doesn’t come without a cost. That price was exacted by Manchin — who has made millions in the coal industry — in exchange for his vote, which was needed in a Senate evenly divided between Democrats and Republicans, who opposed the legislation en masse.

The measure includes tax credits that could extend the life of polluting coal plants and continue to put nearby communities at risk of adverse health impacts. It also stipulates that the government offer areas in the Gulf of Mexico and parts of Alaska for oil and gas development and requires further oil and gas leasing for renewable projects, such as wind and solar initiatives, to move forward.

Manchin also reportedly made a side deal with Democratic leaders to forge ahead with another bill that would reduce barriers for energy projects, including polluting fuel sources such as the proposed Mountain Valley Pipeline.

And while an analysis of the Inflation Reduction Act found that “for every ton of emissions increases generated by IRA oil and gas provisions, at least 24 tons of emissions are avoided,” any polluting energy production is concerning since the science says there needs to be huge declines in fossil fuel use for the world to achieve net zero emissions by 2050.

‘Only a piece of what we were fighting for’

Ania Wright of Sierra Club Maine said the fossil fuel-related parts of the bill are difficult to swallow.

“It’s certainly disappointing, especially where the bill started and recognizing that one senator, Joe Manchin, is able to really derail the future of our climate,” Wright said, referencing the Build Back Better bill Manchin opposed, which at one point included $555 billion for climate programs and didn’t contain the West Virginia senator’s fossil fuel additions.

Wright emphasized that even with harmful parts, the bill contains many positive elements and is “a turning point toward a healthier, cleaner and more just future for people across the U.S.” She cited the $370 billion investment in clean energy programs as a significant victory and added that the measure includes money for clean energy accelerators, which will help with the state’s green bank.

Still, Wright said it’s clear that the legislation should be viewed as a first step by the environmental movement.

“It’s really not the climate bill that we wanted,” she said. “And it’s nowhere near the end of climate action that we need. It’s certainly a beginning, but it has some pretty major trade-offs.”

Adrian Madanes, a member of the group Maine Youth for Climate Justice, agreed. On balance, Madanes said the bill will likely be beneficial in the fight against climate change.

However, Madanes is concerned that the impacts of the fossil fuel elements of the bill could be felt before the environmentally-friendly aspects and is also worried that certain communities will likely be forced to bear the brunt of environmentally destructive energy production.

Given that, youth climate leaders will continue to push policymakers to take additional action, Madanes said.

“[This is] only a piece of what we were fighting for. We’re fighting for something much bigger, and we as activists and youth organizers are going to continue fighting for better climate action and for what is needed in this present moment,” Madanes said.

Some others have been even more critical of the bill’s climate provisions. One such voice is Lisa Savage, who ran as a progressive independent in Maine’s 2020 U.S. Senate election and said the environmental aspects of the legislation fall short.

“Anytime you see the CEO of Exxon … saying what a great bill it is, you can be pretty sure it’s good for fossil fuel companies but not necessarily for the climate,” Savage said.

Savage added that as the world faces a dire climate emergency, she doesn’t believe it makes sense to create more infrastructure to extract and burn fossil fuels.

“How is that solving the climate crisis?” she asked.

Matthew Casale, environment campaigns director for the Public Interest Research Group (PIRG), acknowledged that parts of the bill, such as the offshore drilling aspects, are worrying. However, he said climate modeling shows that even with those aspects, the measure will likely reduce emissions by a significant amount.

He added that he hopes the bill will facilitate a flurry of investments in renewable energy in Maine and other places around the country that will drive down the demand for fossil fuels going forward.

“The Inflation Reduction Act is good, it’s positive,” Casale said. “It’s going to make a big emissions impact and it’s going to move us forward, but there’s more to do. So, [it was] a good day when it got passed, but certainly the work keeps going.” 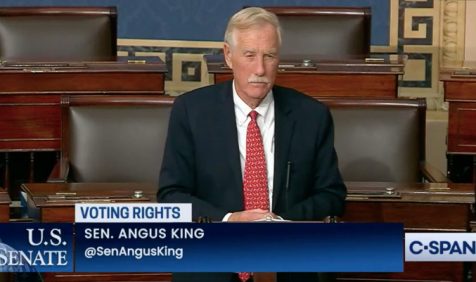 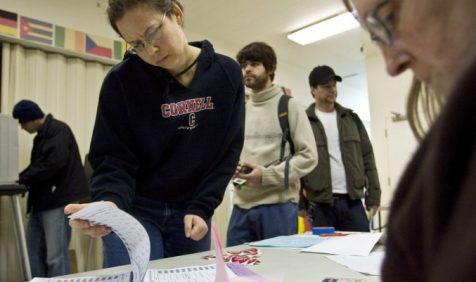 As Maine voters go to the polls to vote in local primaries on Tuesday, Beacon will be watching how progressives… 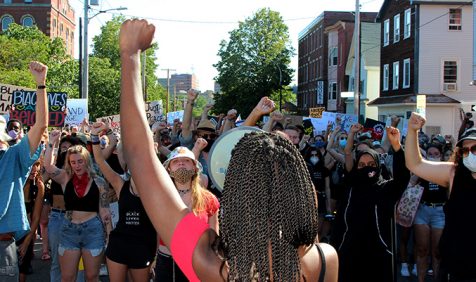 Corporate executives at Avangrid, Hannaford’s, ExxonMobile, Bath Iron Works and other large corporations with connections to Maine were sent regular…