The number of Mainers with health coverage reached a historic high in 2021, boosted by the continued impact of Medicaid expansion along with federal action to combat COVID-19.

Census data released last week shows that just under 78,000 Mainers (about 5.7%) lacked health insurance in 2021. That’s the lowest share of uninsured people dating back to 1988, when estimates of state coverage began, according to a news release from the Maine Center for Economic Policy (MECEP).

In 2019, the percentage of Mainers who didn’t have health coverage was 8%. The drop in Maine’s uninsured rate from 2019 to 2021 was the largest in the country, Gov. Janet Mills’ office announced Monday, and the state went from having the 26th lowest to the 14th lowest uninsured rate in the U.S.

“Over the last two years, despite the challenges of the pandemic, Maine outperformed every other state in improving health coverage,” Mills said in a news release. “Now more Maine people can see a doctor, afford medications, and receive preventive care, keeping families and our economy both healthy. I’ll keep fighting for critical health care coverage that protects the lives and livelihoods of Maine people.”

The increase in health coverage demonstrates the continued impact of expanding the state’s Medicaid program, MECEP stated. Mills on her first day as governor in 2019 expanded the program, which provides health care to low-income people. That came after voters approved the expansion in a 2017 ballot initiative. However, then-Gov. Paul LePage — who is challenging Mills in November’s election — refused to expand the program while he was in office.

As a result of Mills’ decision to honor the will of voters, over 95,000 Mainers had enrolled in the expanded Medicaid system as of July.

Another reason for the growth in health care coverage in 2021 was the expansion of premium tax credits that helped lessen the cost of Affordable Care Act health plans. That policy was put in place through the COVID-19 relief bill signed by President Joe Biden in March of last year. Without the expanded credit and its extension for three more years through the recently signed Inflation Reduction Act, 66,000 Mainers would have faced increased premium costs, according to MECEP.

“This week’s census data reveals the impact that policy decisions made in Washington and Augusta can have on people’s lives,” MECEP President and CEO Garrett Martin said. “The fact that more people have health insurance coverage than we’ve ever seen before in the data is not an accident. It is a result of deliberate choices made by policymakers to expand access to coverage.”

Still, despite the gains made, the group warned that thousands of Mainers will face uncertainty over their Medicaid coverage after the end of the federal public health emergency that was declared as a result of the pandemic.

That’s because under emergency rules, states typically can’t kick people off the Medicaid rolls, even if their income exceeds eligibility rules. When the state of emergency ends, however, as many as 13% of Medicaid enrollees in Maine could be at risk of becoming ineligible for the program, MECEP estimated. The pandemic public health emergency is slated to end October 15, but the Biden administration has signaled it could be extended past that date.

Along with initiatives to increase health care coverage, other government programs also helped people across the country and in Maine weather the impacts of the pandemic. One such policy was the expanded Child Tax Credit, which provided an influx of funds to families around the U.S. Data shows child poverty fell by 46% in 2021, reaching a record low that experts believe was primarily sparked by the expansion of the credit.

In Maine, the program rapidly decreased child hunger, and 91% of kids across the state benefited from the initiative. However, Congress allowed the expanded credit to expire at the end of 2021. Many Democrats support bringing back the policy, but they have been met with resistance from Democratic Sen. Joe Manchin of West Virginia and congressional Republicans.

In addition to the child tax credit, MECEP said Mainers benefited from a decision by state lawmakers to double the Earned Income Tax Credit, a program that provides a tax break for low income workers and families.

“As with health insurance coverage, the economic security of tens of thousands of Maine families got a significant boost thanks to recent policies enacted at the state and federal level,” Martin said. “Unfortunately, the expiration of federal programs like the monthly Child Tax Credit means some families may face greater challenges in the future and reinforces the continued need for state-level action on these issues.”

Photo: Volunteers with the referendum campaign to expand Medicaid coverage in Maine | Via Maine People’s Alliance

For April Turner, access to social services isn’t just a policy platform. It’s what got her where she is today. … 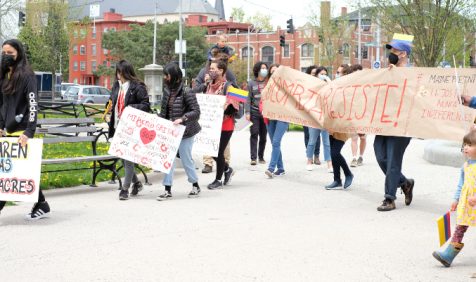 Organizers in Portland held a rally over the weekend to show solidarity with demonstrators in Colombia, where a nationwide strike… 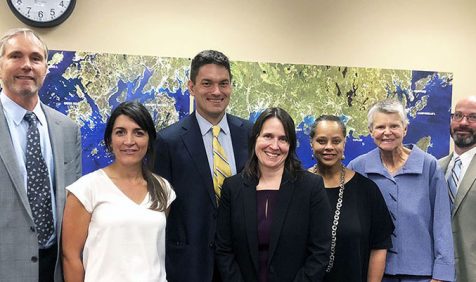